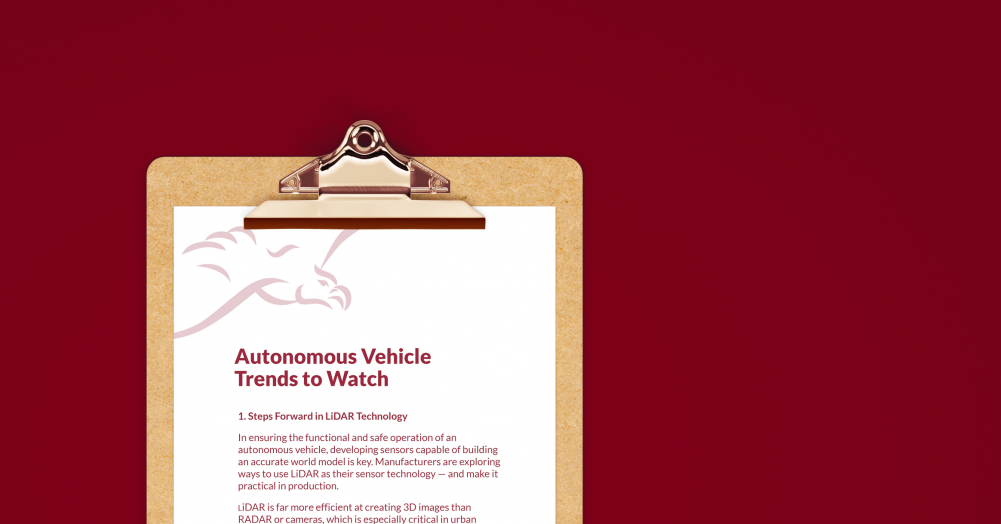 With millions of vehicles that exhibit some degree of autonomy already on the road, the industry is now turning to the question of when they’ll fully reach the mainstream.

Manufacturers are preparing to ramp up production capabilities to meet new demand. Autonomous vehicle R&D teams continue to discuss which technologies provide the safest, most user-friendly experience for drivers – at an affordable price.

With that backdrop in mind, here are three trends that will define the autonomous and connected vehicle debate in 2021, along with how we at New Eagle are using them – and helping push them forward.

In ensuring the functional and safe operation of an autonomous vehicle, developing sensors capable of building an accurate world model is key. Manufacturers are exploring ways to use LiDAR as their sensor technology — and make it practical in production.

LiDAR is far more efficient at creating 3D images than RADAR or cameras, which is especially critical in urban settings. More recent advancements such as flash LiDAR only add to this appeal. For now, though, the cost of implementation is still prohibitive to the commercial viability of LiDAR technology for widespread adoption in autonomous vehicles.

While New Eagle isn’t directly involved in the refinement of LiDAR technology, our expertise in autonomous vehicle actuation positions us to partner with the engineers of tomorrow, who may ultimately unlock the secrets to its true power and viability. We’re more equipped than anyone to make future LiDAR-based autonomous vehicles fleet-scalable, and safety-focused.

When it comes to the automotive industry, even the most minor failures can be a matter of life and death. Artificial intelligence – the decision-making algorithms autonomous vehicles use – is already far more likely to save lives during an incident than a human counterpart. But that doesn’t mean engineers are resting on their laurels.

While some choose to focus on improving the sensors themselves, others are improving data processing capabilities. Machine learning is helping to improve how algorithms assess the vehicle’s perception data, and tap into past experiences, to make decisions like a human driver would — or in some cases, even more intelligently.

Creating artificial intelligence can be a painstaking process. Though machine learning allows for improvement with minimal explicit programming changes, autonomous vehicle developers will always need to make tweaks and review data during testing.

More advanced machine learning algorithms will be key to solving some of the “last-mile” challenges that New Eagle is facing head-on as we help our partners bring fleet mobility to their autonomous transportation.

The benefit of having so much sensing technology on the roadway is the vast amount of raw data that can be gathered simultaneously. One new strategy some developers are using is layering the data collected by all sensors and human drivers. The result is the creation of a far more accurate world model.

Other developers are supplementing this strategy with components external to the vehicle, including sensors that can be incorporated into roadway infrastructure.

By adopting this concept on a greater scale, the world view for the collective will only improve. The more sensors that exist in an environment, the more precision can be provided in model-building.

Much like machine learning, collaborative map building will prove critical in many autonomous applications improving the “last-mile” phase of autonomous delivery. What one vehicle sees, all vehicles can see, allowing the fleet to improve its memory and accuracy as a unit.

Want to learn more about how New Eagle is pushing autonomous vehicles into the future?  Visit our Autonomous page!